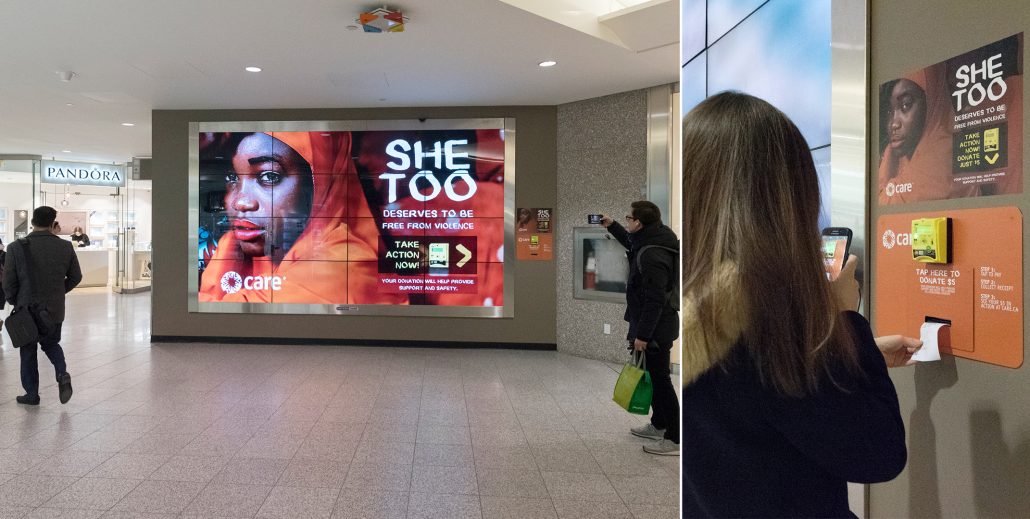 A PATTISON Outdoor digital matrix accepts donations via a “tap-to-give” payment terminal in support of CARE Canada’s #SheToo initiative, which is part of CARE’s March4Women campaign.

TORONTO, ON, April 4, 2018 – PATTISON Outdoor, Canada’s leading Out-of-Home advertising company and its digital innovation arm, Fourthwall teamed up with Jungle Media to  promote CARE Canada’s She Too movement in an interactive campaign that launched this week in Toronto’s PATH. In the execution, a PATTISON digital matrix is reframed as a digital donation wall, where passersby are offered an opportunity to directly engage with CARE’s overall mission. The She Too campaign is a part of CARE’s March4Women initiative, which aims to overcome poverty and discrimination by creating equal rights and opportunities for women and girls in developing countries.

“CARE’s She Too campaign is capturing the momentum of a global movement raising awareness and action for women everywhere. Not just in Hollywood or in North America, but in developing countries where women might not have a safe place to share their story and get support,” says Kasia Souchen, Digital Marketing Manager at CARE Canada. “Together with PATTISON, we’re eager to engage with Torontonians on this important issue and offer an easy way to make a real difference in the lives of women and girls in developing countries.”

Found in the Royal Bank Plaza of Toronto’s downtown PATH, CARE Canada’s four-week interactive stunt is a first for the charitable organization, and the Canadian Out-of-Home industry. With Fourthwall handling the production and installation, the “tap-to-donate” panel was designed to accept preset donations of $5 using a cashless payment terminal, accepting credit and debit cards as well as smart phone payments. A full-motion digital spot, vinyl poster and branded payment panel were also designed by Fourthwall to direct passing donors to the terminal. To complement the campaign, brand ambassadors from CARE Canada will be scheduled on-site for a portion of the campaign to answer any questions consumers may have about the organization and its work.

“We are proud to work with Jungle Media and support CARE Canada in their mission of bringing awareness to women across the globe,” says Dmitri Melamed, Vice President and General Manager of Fourthwall. “The cashless payment solution offers passersby who are in a hurry or who do not have exact change, the ability to make simple and quick donations to this great cause.”“

“The digital stunt is a compelling aspect to this campaign,” says Catherine Ramsey, Media Planner at Jungle Media. “The simple contactless donation system bridges the gap between building impassioned awareness and making real change in the moment. We are thrilled to include this impactful execution as a part of our campaign this year.”

PATTISON Outdoor Advertising, a division of The Jim Pattison Group, is Canada’s largest Out-of-Home advertising company. PATTISON provides innovative solutions for Out-of-Home advertising with products ranging from Classic billboards and posters to transit, digital, airports, residential, office, and street furniture. PATTISON offers Canada’s largest portfolio of Digital Out-of-Home (DOOH) advertising properties through PATTISON Onestop, a world-leader in the design, operation, and advancement of digital advertising networks for the office, transportation, sports retail, and residential environments, and with its experiential/interactive development arm at Fourth Wall. PATTISON is headquartered in Toronto Ontario and includes over 25 sales offices across the country providing advertisers unmatched reach and coverage with products available in nearly 200 markets coast to coast. PATTISON Outdoor Advertising is the exclusive supplier for advertising on the Toronto Transit Commission’s (TTC) transit system.

CARE Canada is an international humanitarian and development organization committed to saving lives, defeating poverty and achieving social justice. Active in more than 90 countries, CARE places a special focus on women and girls as it believes we cannot overcome poverty until all people have equal rights and opportunities, visit www.care.ca.

Founded in April 2010, Jungle Media has grown to become a national influence on the media scene, winning awards for both innovation and leadership. Our goal is to deliver creative, strategic and results driven media campaigns for our clients. We work as experts in an evolving landscape, creating media that didn’t exist and exploring new species of media.

In this Out-of-Home media first, Mazda’s innovative campaign brought PATTISON’s digital and interactive agency, Fourth Wall together with creative agencies, Excelerator Media and J. Walter Thompson Canada. With the objective of elevating the brand, this campaign was created to be every bit as engaging and innovative as its latest vehicle, the MX-5 RF. With the ability to turn heads, the sleek MX-5 RF was showcased on a high-traffic Digital Matrix Wall in Toronto’s PATH, where custom-built technology combined crowd detection and facial recognition to track impressions from passersby. The result: expert OOH craftsmanship that successfully reflected Mazda’s brand position.